Would SEC’s Regulation Best Interest Regs Be Killed Off Under a Democratic House?

Rep. Maxine Waters, who would chair the House Financial Services Committee, is a vocal critic of the regulation but isn’t likely to be able to stop it.

While some polls might say chances are high that Democrats will take back the majority in the House of Representatives after the midterm elections, even then it’s not likely to change the course of the SEC’s proposed Regulation Best Interest despite key Democrats being opposed to it, according to FA magazine.

Democrats are ahead by 7.2 points, according to a Real Clear Politics poll cited by the publication. And a recent Ipsos poll had 49% of voters favoring Democratic candidates, compared to 42% who said they’re voting Republican, FA magazine writes.

In the likelihood the Democrats take control of the House, Rep. Maxine Waters, D-Calif., is likely to take over from current chairman of the Financial Services Committee, Jeb Hensarling, R-Texas, according to the publication.

Waters has slammed the SEC’s proposed overhaul of advisor and broker standards as not going far enough to protect investors, FA magazine writes. She has taken issue with the rule not imposing the fiduciary standard on brokers, as well as with the limited prohibition on the use of terms “advisor” and “adviser” by brokers, which she says would still let brokers “get away” with terms such as “wealth manager” or “financial planner,” according to the publication.

Nonetheless, with Donald Trump remaining president, there’s probably not much she can do with the committee she would head other than changing its tone, FA magazine writes. 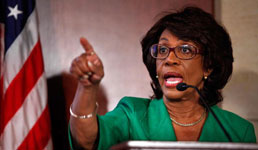 “Does the chair of the House Financial Services Committee have some authority? I’d say yes from the bully pulpit point of view, certainly,” David Tittsworth, counsel in Ropes & Gray’s Washington, D.C., investment management practice, tells the publication. “But absent a full legislative change, and we know who the president is, a statutory change that tells the SEC to do something different is very unlikely.”

Trump would still be able to veto any legislative change, requiring two-thirds of the House and the Senate to overturn — “which is extremely unlikely,” Tittsworth tells FA magazine.