A new FA-IQ poll seems to suggest support may have dipped for the newest White House resident.

Compared to sentiments expressed immediately after his election, FA-IQ readers seem to be losing some of their enthusiasm for U.S. President Donald Trump.

According to a straw poll this publication conducted Tuesday, 43% of our readers gave Trump a thumbs-up for his first 100 days in office. At time of publishing, 57% think he could have done better.

The contrast in sentiment among FA-IQ readers about Trump now and during the election last fall is noteworthy. In an unscientific reader poll on Nov. 8, we asked readers who they would be voting for that day in a two-candidate race. Nearly two thirds — 64% — chose Republican nominee Trump, with 36% opting for the Democratic nominee Hillary Clinton.

Late November we posted a three-answer poll for the question, “What will the investment outlook be under President Trump?” In reply, 59% said investments would thrive, 25% reckoned they would suffer, and 16% thought it would be a wash.

So far stocks at least have done well under Trump, with the S&P 500 up more than 6% for the year to date.

Brett Anderson, president of Hudson, Wis.-based St. Croix Advisors says he went from positive and optimistic to slightly negative in his view of Trump.

“I thought he’d help bring accountability to both Republicans and Democrats and he hasn’t,” says Anderson, whose firm manages $41 million.

But Brad Rosley, president of Glen Ellyn, Ill.-based Fortune Financial Group, which manages $45 million, says the Trump administration is still “all very exciting” and he remains positive about what the president can accomplish. In particular, he is happy President Trump “has put a stop to the direction the former president had.” 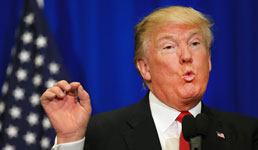 And while during the leadup to the election advisors often expressed a reticence to speak about politics, now financial advisors seem to be increasingly comfortable sharing their political views on popular social media networks, according to MarketWatch. But this may drive clients away, some industry insiders warn.

Some advisors say having conversations about politics in the context of what they could mean for their clients’ investments remains important, MarketWatch writes. Others explain that President Trump’s own behavior has led the way to discussing politics online — including on Facebook, Twitter and even LinkedIn, traditionally a business-related platform rather than one for personal expression. Elissa Buie, a certified financial planner and CEO of Yeske Buie, who’s been critical of Trump on her Facebook page, tells the news service she not only wouldn’t care about losing a client over her opinion of Trump, she would also “consider firing” one who’s vocally pro-Trump.

Diahann Lassus, president of Lassus Wherley, who’s also posted criticism of Trump on social media, tells the web publication she’s not worried about losing clients over her political views because if her views were an issue they probably would not have hired her, she says. And being honest on social media means more authentic relationships, which are stronger, Carolyn McClanahan, certified financial planner and president of Life Planning Partners, tells MarketWatch.

Yet pro-Trump advisors are apparently less likely to voice their opinions on social media, MarketWatch asserts. But some of them do.

Many advisors, however, have withdrawn from social media, according to the web publication. And that may be professionally for the best. Duane Thompson, a senior policy analyst at fi360, tells MarketWatch advisors could be taking a big risk expressing their personal opinions on Trump.

Tom Hegna, an author, full-time speaker and president of TomHegna.com, tells the web publication advisors should be authentic. But talking politics on social media isn’t likely to gain them any clients and may lead some to leave, he says. Marie Swift, president and CEO of Impact Communications, suggests advisors first work out a social media strategy in line with their public relations strategy, writes MarketWatch.