Be Ready When Your Clients Mention the Election

Talking politics with clients is a minefield that’s sometimes hard to avoid.

This year’s presidential election is one for the record books: candidates on opposite ends of the policy spectrum; newcomers bucking the status quo; and 24/7 media coverage of every word, tweet and gaffe. With the summer conventions and Election Day still to come, already heated political discussions are only likely to get hotter.

In such an environment, experts and advisors agree that answering client questions about political preferences can be tricky business. And regardless of whether advisors choose to engage or not, advisors need to plan ahead for how they will respond.

The ballast that keeps most political conversations from capsizing is respect, according to Sharon Schweitzer, lawyer and founder of Austin, Texas-based Protocol & Etiquette Worldwide.

Schweitzer, who guides financial executives on workplace conflict and international business etiquette, adds that “Respect is a universally understood language. No matter what our cultural conditioning, we all understand and recognize respect.”

So advisors need to keep respect top-of-mind when they find themselves facing a political question.

But respect alone may not be enough, and Schweitzer recommends several additional steps.

“First do a self-assessment,” she recommends. “Are you going to respond and engage or keep your views private? Whichever way you choose to go, formulate a few responses to have at the ready when you need them.”

Don’t want to engage? One of the biggest challenges is going to be the persistent questioner. Schweitzer’s suggestion for these cases: Play the undecided card and then steer the conversation to something personally meaningful to the client.

Overall, Schweitzer says that making a personally informed decision about how to address political questions and then sticking with it is the best strategy.

“Take the time to self-assess your comfort level. Be authentic and stay the course,” she explains. 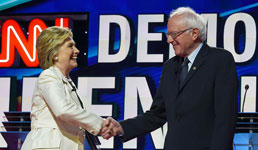 Authenticity can win the day

David Bahnsen, managing director, partner and chief investment officer of Newport Beach, Calif.-based The Bahnsen Group, agrees about being authentic regarding political views. Bahnsen, who manages $750 million, explains, “Being my authentic self leads to an authentic relationship with my clients.”

As a result, he says is completely open about his views and about his role as California finance advisor for Marco Rubio’s campaign.

“I’m willing for my Trump-loving clients to let them know that I’m a Rubio guy,” he says. “We embrace the dialog and our clients now have an expectation for us to have a position on the issue of the day.”

Even when there is disagreement, Bahnsen still engages but emphasizes that he always does so with civility and respect.

This openness attracts clients that share the point of view of Bahnsen and his colleagues. He says his involvement in politics gives his clients the assurance that, “We represent what they believe about the economy and that their advisor is connected and informed.”

While he understands that his approach might not work for everyone, his advice for advisors with strong beliefs is to be confident in their opinions and establish themselves as subject experts.

“As an independent advisor I have the freedom to publicly state what I believe and I’ve never found it to be anything but a net positive,” he concludes. 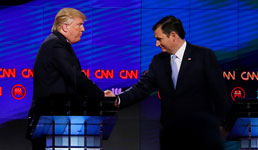 Leave politics out of it

Pedro Silva, financial advisor with LPL Financial in Shrewsbury, Mass., takes a different approach. Silva, who manages $150 million, believes “the worst thing you can do is engage” when asked a political question.

“The media has done such a good job of negatively defining the two sides in this election that if you’re on the opposite side from someone they have a list of negative qualities they can automatically assign to you,” he explains.

But in his experience clients don’t bring up specific candidates directly. Instead they refer to politics indirectly through comments such as, “It’s a shame people vote against their best interest.”

When they do make comments about politicians and politics, Silva feels that what his clients really need is for him not to disagree with them.

“Our job as the advisor, when confronted with someone on the extreme of either side, is to find a topic on which everyone can agree,” he says.

In such situations, he suggests closing off further engagement with comments such as, “I hope we can find a way to move in a more positive direction as a country.”