Welcome to this week’s ETF Insider. The great thing about ETFs is that low investment minimums and dwindling commissions mean there’s little to keep you from pulling the trigger on a product that catches your eye. But that flexibility can cost you, as we note this week. We look at what types of ETFs are prone to shutdowns that will leave clients with taxable gains, and how setting up ETF buy or sell orders overnight could result in bad trade execution in the morning.

Signs Your ETF is Poised to Disappear

Having an ETF in your portfolio liquidate, or even merge into another fund, can be a real annoyance for advisors and their clients. But there are several key attributes that closing ETFs often share, according to a new Morningstar report that also names the firms that have been most aggressive in pruning their lineups.

Last year, more than 800 mutual funds and ETFs liquidated or merged with another product – the highest level since 2005, Morningstar’s report found.

As of September 18, FactSet data shows that 38 ETFs had liquidated so far in 2021. That compares to 186 ETF disappearing acts during all of 2020, a January analysis of FactSet data conducted by Financial Advisor IQ’s sister publication, Ignites.

Merging or liquidating ETFs create a host of challenges for investors.

Liquidated ETFs trigger capital gains for investors who have held on as they appreciated. And a merged ETF may move into a strategy that may not match what the investor bought the product for in the first place, Morningstar’s report shows.

Some ETF managers are more apt to shutter a poor-selling product, or overhaul their ETF lineups than others, the report shows. In the 16 years between 2005 and 2020, Invesco shuttered nearly three times as many mutual funds and ETFs (355) as the next most prolific pruner, Direxion (105). iShares eradicated 104 ETFs in that timeframe. 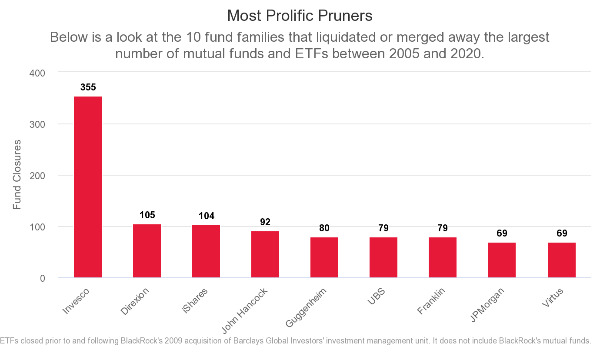 A good chunk of Invesco’s closures were ripple effects of the acquisition of Guggenheim Investments’ ETF business in 2018 and OppenheimerFunds in 2019. Direxion has closed funds as the leveraged and inverse ETF specialist’s product strategy has evolved to incorporate strategies built for buy-and-hold investors, and iShares has moved to close funds in niche areas like currency-hedged strategies, Ignites has reported.

Big manager mergers are likely to lead to product overhauls, but there are ways to sidestep the swinging door on other ETFs. In short: be wary of very new, very small funds. Expensive and mediocre-performing products probably are not long for this earth as well, Morningstar warns in its report.

ETF providers’ proclivity toward a “fail fast” product development can often turn into boom-and-bust cycles. In fact, about 44% of the funds and ETFs closed between 2005 and 2020 never made it to their fifth birthdays, the Morningstar report notes.

Size can be another red flag, although the exact threshold for a fund to be at risk is hard to pin down, the report notes. But if the product makes it to $140 million, it has a good chance of surviving, according to Morningstar. Of all the ETFs and mutual funds launched since the beginning of 2005, 82% of those reaching that asset threshold were still around at the end of 2020.

Burning the Midnight Oil May Cost You in ETF Trading: Vanguard

Coming up with great portfolio moves in the wee hours of the night is fine, but Vanguard is warning ETF investors that they may not want to pull the trigger on trades until mid-morning.

That’s because trading at market open can result in poorly executed orders that end up costing investors a lot, the ETF giant wrote in an article posted on its advisor website last week.

And it has nothing to do with a lack of caffeine.

“For some of you more accustomed to traditional mutual funds, you find yourself wanting to place trades over the weekend, after the market has closed, or first thing in the morning,” write Patrick Hooper and David Sharp, two specialists with Vanguard’s capital markets desk. “While that timing may work for mutual funds that strike a net asset value (NAV) only once a day at 4 p.m., Eastern time, it's not the best for ETFs.”

Trades placed overnight are executed at the opening auction, when the exchange tries to match up all of the buy and sell orders, they note. If there far more buy orders than sell orders, the ETF’s price can swing above the underlying value of the portfolio. Conversely, the price can swing to a discount to NAV if there are more sells than buys.

The problem intensifies in periods of market volatility, they wrote.

The risk is especially intense for big buy and sell orders, or orders of thinly traded ETFs, they note. So if you can wait until after the market opens to trade, that’s best. If not, then use a limit order that sets bounds around the price you deem acceptable, rather than a market order which will execute on the price on offer at the time of execution.