The 29-year veteran of ING Bank took the reins of Swiss banking giant UBS in 2020.

This is part of a series of profiles of top executives in the wealth management industry.

During the Covid-19 pandemic, UBS chief executive officer Ralph Hamers emerged as one of the financial sector’s most vocal advocates of hybrid working.

Born in the town of Simpelveld in the southeastern Netherlands in 1966, Hamers graduated from Tilburg University with a master of science in business econometrics/operations research. He joined ING Bank in 1991 as a relationship manager for structured finance in the firm’s global clients division.

Hamers spent 29 years at ING and worked in a number of roles as he rose through the bank’s ranks, including as leader of its Romanian and Dutch operations. After an almost three-year stint as CEO of ING Belgium, he was appointed CEO of ING in October 2013.

A relative unknown outside the company, he had to rush back from a ski vacation so that ING could announce his appointment as CEO.

During a 2020 interview on ING’s YouTube channel, Hamers said his wife was the first person he called upon finding out he would be the bank’s CEO and acknowledged the challenges he faced as ING’s new leader. “The task was enormous,” he said, citing the expectations and pressures of rebuilding following the financial crisis. “That was a bit daunting, but I’ve loved every minute.”

Hamers is credited with guiding ING through a period of restructuring in the wake of the financial crisis, which saw it repay bailout money received from the Dutch government. During his time at the helm, ING also resumed dividend payments and embarked on a major digital push.

“I never doubted that we were able to make it. Never,” Hamers said during the 2020 interview. “I knew we had it in us to come back on top and come out even better than the way we went in the crisis.”

The eco-friendly banker was even dubbed the “non-flying Dutchman” during his time at ING on account of his avoidance of flying when possible. As CEO, for example, he would drive the five hours between Frankfurt and Amsterdam in a hybrid BMW, according to the Financial Times.

Speaking with the FT in 2015, Hamers explained how his Christian beliefs have influenced his management style. “The way I live my life as a private person is how I live my life as a CEO,” he said. “People don’t have to earn my trust. I trust them from the beginning. They can only lose it.” 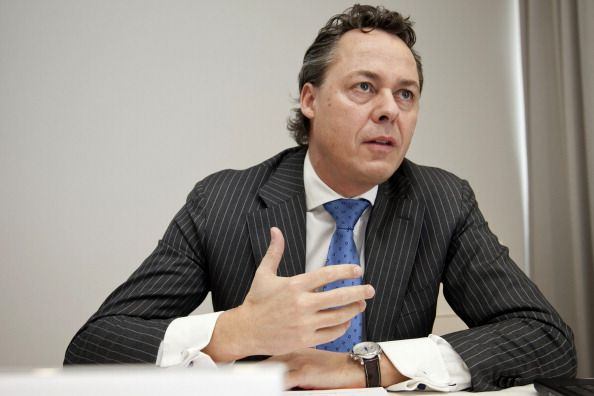 His performance at ING caught the attention of UBS, and he became a group executive board member of the Swiss financial giant in September 2020. Hamers succeeded Sergio Ermotti as the firm’s CEO on November 1 of that year. Hamers’ appointment marked the first time in UBS’ history that the firm has had a non-Swiss CEO and chairman.

Since becoming CEO of UBS, Hamers has said that wealth management is central to the firm’s growth plans. The company is targeting 2023 for the full rollout of its Wealth Management Americas Platform, which it is building in collaboration with Broadridge Financial Solutions. The Wealth Management Americas Platform is expected to serve UBS’ advisors “better and better,” Hamers said in February during UBS’ fourth-quarter earnings call.

During the pandemic, Hamers grabbed plenty of attention as a champion of hybrid working. In July 2021, he said up to 75% of UBS employees can work in hybrid arrangements permanently.

In August 2021, he encouraged the industry to adopt hybrid working arrangements. Employees at UBS have been equally productive, if not more so, working from home compared to the office, according to Hamers. Citing the results of a firm-wide analysis, he said at the time that two-thirds of UBS staff could carry out their jobs from home “highly effectively.”

In an extension of its hybrid work arrangements, earlier this year UBS offered a 100% remote work option for eligible U.S.-based employees.