Tax Deadline Extension for Most Taxpayers, But Not the ‘Super Rich’

The majority of Americans can probably expect a later tax deadline this year in the wake of the coronavirus pandemic, but the ultra-wealthy will still have to pay by April 15, according to news reports.

President Donald Trump’s administration plans to delay the deadline for filing individual taxes as well as those for small businesses, covering “virtually all Americans, other than the super-rich,” Treasury Secretary Steven Mnuchin said Wednesday, according to the Wall Street Journal. Officials are likely to announce more details soon, he said, according to the paper.

Congress doesn’t need to approve the delay if one is approved by the Treasury, as the change would be implemented “on an administrative basis,” Mnuchin told lawmakers during a hearing before the House Appropriations Committee on Wednesday, the Journal writes.

Treasury officials believe they can extend the deadline by waiving penalties on late tax payments, which they believe they’re authorized to do, the paper writes. In addition, the officials are looking into whether they can also waive any interest on payments due as part of an emergency disaster declaration, according to the Journal.

House Democrats had asked the Internal Revenue Service on Tuesday whether the April 15 deadline should be pushed back, the newspaper writes. They brought up the government’s ability to waive penalties and extend deadlines, according to the Journal. 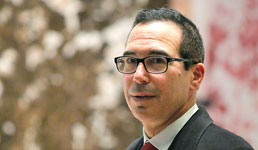 Typically, individuals must pay taxes on their previous year’s earnings by April 15 or face interest charges as well as penalties, the newspaper writes. As long as a taxpayer pays by that date, they can get an extension until mid-October to file the return, according to the Journal. The Trump administration’s move would go even further, however, people familiar with the matter told the newspaper before Mnuchin’s testimony.

“For small- and medium-sized businesses, for hardworking individuals, we are going to recommend to the president that we allow the delay and that they don’t have to pay an interest or penalty on that,” Mnuchin told reporters after his testimony on Capitol Hill, according to the newspaper. “That will have the impact of putting over $200 billion back into the economy, and that will create a very big stimulus.”

The White House and the IRS didn’t respond to the Journal’s requests for comment.

On Tuesday, Trump met with Senate Republicans about other possible measures to counter the effects of the coronavirus pandemic on the U.S. economy. This included a possible payroll tax break, paid sick leave expansion and emergency loans for small businesses, according to the newspaper. The House was planning to vote on the proposals Thursday, a congressional aide tells the Journal.