If American CEO compensation is indeed tied to company performance, many are getting overpaid, according to one corporate responsibility research group. Among them are the chiefs of JPMorgan, Ameriprise, Wells Fargo and Goldman Sachs, according to As You Sow’s new report.

Between 1978 and 2018, inflation-adjusted CEO compensation soared 940%, according to the group. As You Sow used realized stock options in making its calculations and cited data from the Economic Policy Institute. The group also pointed to growing public sentiment that executive pay packages are skewed, citing the results of a Stanford University poll in which 86% of respondents said that they believe the chiefs of large, public U.S. firms take home outsized paychecks.

To calculate exactly how much "excess" pay each CEO earned, the advocacy group looked at chief executive comp packages for all S&P 500 companies, tapping data from Institutional Shareholder Services as well as from HIP Investor. The latter computed what each CEO would have earned if their pay were tied directly to cumulative total shareholder return over the previous five years. As You Sow also took into account the percentage of shareholders who voted against the pay package and the ratio of the chiefs’ pay to that of the median worker at their firm, the group says. 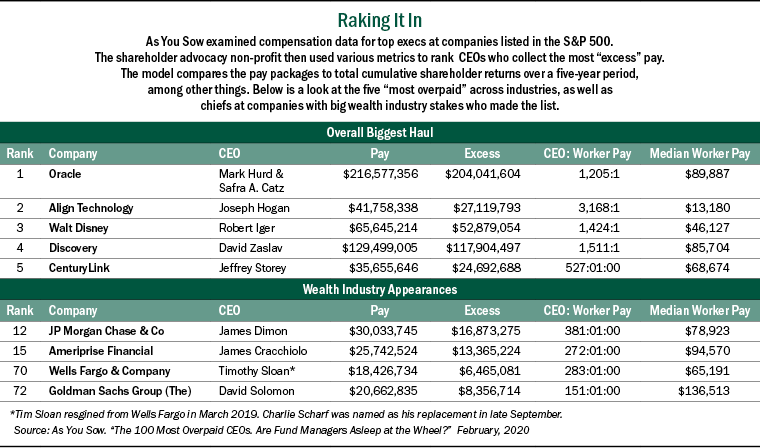 The group’s top-10 most overpaid CEO list cuts across industries, but does not include any wealth firm brass. The closest is JPMorgan’s Jamie Dimon at number 12, with a total 2019 compensation of $30 million. That’s around $16.9 million too much, As You Sow argues. Dimon’s pay was opposed by 28% of shareholder votes, while his salary is 381 times larger than that of the median JPMorgan employee, the group says.

Ameriprise’s James Cracchiolo is ranked at number 15. As You Sow estimates that about $13.4 million of his $25.7 million pay in 2019 was in "excess." Sixty-six percent of the votes were against his compensation, and his salary is 272 times higher than the median worker’s at Ameriprise, the group says.

Former Wells Fargo CEO Tim Sloan, who stepped down in March 2019, landed at number 70, with total compensation of $18.4 million in 2019. The group estimates that Sloan was overpaid by around $6.5 million, although only around 8% of the shareholder votes were opposed to his pay. Sloan’s compensation was 283 times larger than the median worker’s at the firm, according to As You Sow.

Sloan’s successor, Charles Scharf, earns even more than Sloan did. The bank awarded him a $23 million package, according to FA-IQ sister publication Agenda. That includes a $2.5 million base salary, a cash bonus of $5 million and $15.5 million in incentive-based equity compensation. Furthermore, Scharf’s performance pay will exclude costs related to ongoing expenses arising from penalties and litigation, as well as investigations, tied to the 2016 bogus account scandal, Agenda reports. Scharf joined Wells from BNY Mellon in late October.

Goldman Sach's David Solomon features on the list at number 72. The group estimates that his $20.7 million compensation had around $8.4 million in "excess" compensation. Only 9% of the votes were against his pay. Solomon’s pay was also slightly more modest than other financial firm chiefs when considering pay ratios: his was only 151 times larger than that of the median Goldman Sachs worker’s, according to As You Sow.