Schwab Tries to Ease Worries of Smaller RIAs, Plans to Be Default Platform

Charles Schwab executives have reiterated the firm’s commitment to “RIAs of all sizes” — especially those with less than $100 million in client assets — to allay their fears in light of the announced deal with TD Ameritrade.

The firm is “highly committed” to RIAs, Schwab CEO Walt Bettinger said Tuesday at a business update presentation. He noted the firm has “historically been a leader in the sub-$100 million AUM RIA space.”

Bettinger said Schwab is looking forward to combining its RIA capabilities with TD Ameritrade to serve “an even broader array of RIAs of all different sizes.”

Smaller RIAs have expressed concerns about their future in the aftermath of a Schwab-TD Ameritrade deal, which has yet to be finalized.

Bettinger said the notion that Schwab is not interested in servicing RIAs with less than $1 billion is “inaccurate, naive and inconsistent” with the firm’s past actions.

Schwab and TD Ameritrade executives are set to kick off conversations about integration at the end of this week. Schwab expects to spend $1.6 billion on the integration over the next three years, creating a wealth management giant with more than $5 trillion in client assets. 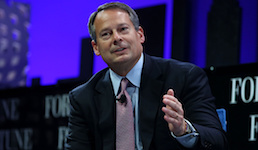 One persistent question among RIAs revolves around repapering.

TD Ameritrade Institutional president Tom Nally said at the firm’s conference last week that majority of the accounts would not have to repaper.

Schwab COO Joseph Martinetto said Tuesday he expects the porting of the accounts to be “automated” and without additional paperwork or digital applications.

“Not only is it not paper-based, it should not have to go through an automated application process for the vast majority of accounts,” he added.

Schwab Advisor Services head Bernard Clark said the integration would not result in higher or additional fees for advisors.

“We have no intention of raising fees on small advisors and advisors at large, in effect. And more importantly, we don’t want to change the economic relationship we have with them by instituting some other kind of different fee,” he said.

Schwab to be ‘platform of choice’

Clark said Schwab is already talking with some dually-registered advisor clients who sought clarity on technologies and application program interfaces that would be incorporated into the merged entity.

Schwab systems are expected to be the platform of choice for the new entity, Martinetto explained.

Exceptions would be made when “there’s a clear material advantage” to what TD Ameritrade brings to the table, Martinetto said, acknowledging that some TD Ameritrade capabilities “are superior and different.”

Examples of TD Ameritrade’s superiority are “particularly around areas like retail client trading, or in some of their open API approach that they’ve used to help their RIAs,” he said.

Martinetto said those capabilities would either be brought over directly or built out through Schwab’s platforms, but ultimately it is Schwab’s strategy, vision and values that will be reflected.

Like Nally last week, Bettinger brushed aside any concerns related to a second review by the Department of Justice of the potential anti-trust implications of the deal. Both expected the second review, given the size of the deal, and both said their firms are cooperating with the review.

“We feel very confident that the transaction, as announced, is in the best interests of all consumers, both end investors as well as our RIAs. And, we feel confident continuing to demonstrate through facts that that’s the case,” he added.

In response to an analyst asking how Bettinger could argue the deal is not anti-competitive even if it creates an entity with 40-50% market share, the CEO said he expects the combined market share to be in the lower end of that range.

He added: “Individuals who make a living advising other people on the investment of their money, they have a broad array of choices,” including independent broker-dealers, wirehouses and hybrid models.