State reg boss is determined to step up where he believes the SEC has failed.

The Massachusetts Securities Division held Tuesday a hearing on its proposed fiduciary rule for brokers, advisors and other financial professionals, edging closer to creating stricter rules aimed at filling the perceived investor protections gaps in the SEC’s Regulation Best Interest.

The new rule would also clarify that the existing suitability standard for those financial professionals would still apply to any relationship or transaction expressly excluded from the fiduciary standard.

“I am proposing this standard because the SEC has failed to provide investors with the protections they need against conflicts of interest in the financial industry with its ‘Regulation Best Interest’ rule,” William Galvin, the state’s chief securities regulator, announced in November when he signed off on the updated proposed fiduciary rule. “Investors must come first.”

At the hearing Tuesday, Sifma president and CEO Kenneth Bentsen, Jr. highlighted four reasons the broker-dealer group is opposed to this state initiative:

Barbara Roper, director of investor protection at the Consumer Federation of America, tells FA-IQ the fact that Massachusetts’s Securities Division is “being inundated with negative comments from industry groups who are very, very happy with” the “best interest standards in name only” of the SEC and the National Association of Insurance Commissioners isn’t a surprise. 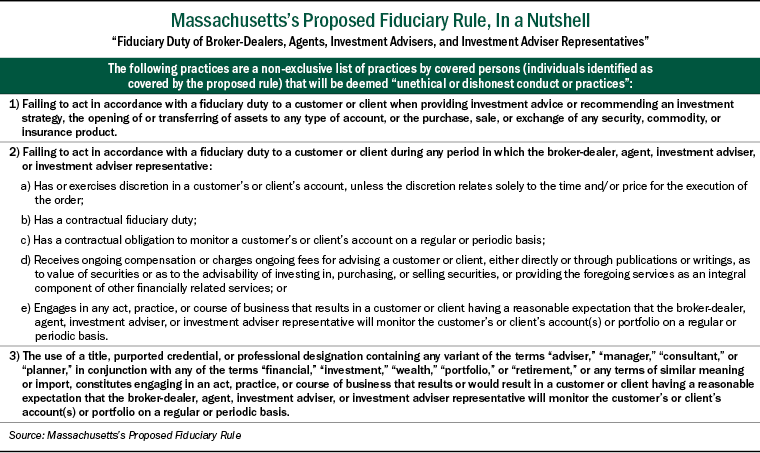 The CFA — which is among those supportive of fiduciary rule initiatives from states — is among those that submitted comments to Massachusetts’s Securities Division before the hearing.

“In light of that failure in leadership at the SEC, it is left to the states to deliver the strong fiduciary protections their citizens need and deserve. If adopted without weakening amendments, your proposal would not only improve protections for the citizens of Massachusetts, it would provide a model that other states could follow to extend these protections to their own citizens,” Roper and CFA financial services counsel Micah Hauptman write in the letter.

Nevada and New Jersey are also working on their own versions of fiduciary rules for the financial advice industry.

The CFA counters what critics of Massachusetts’ proposal, like Sifma, assert by saying: 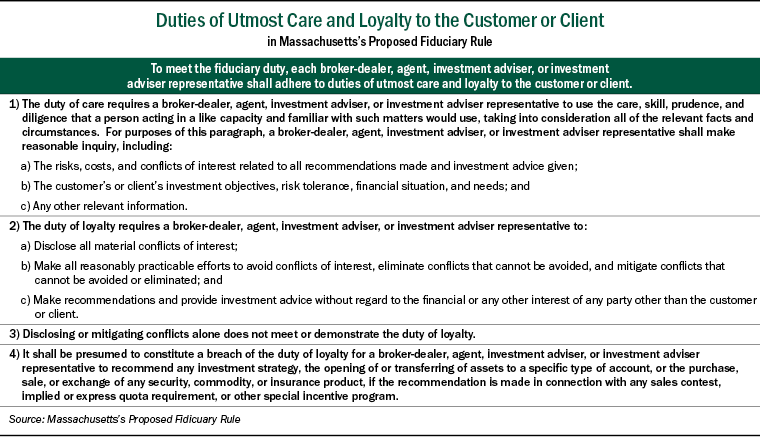 In a legal update from Dechert’s financial services group, the law firm says that while there are expected to be a number of judicial challenges to any final regulations adopted by Massachusetts, it is “important for industry participants to evaluate the potential impact of state fiduciary initiatives on their operations and supervisory and compliance policies and procedures.” 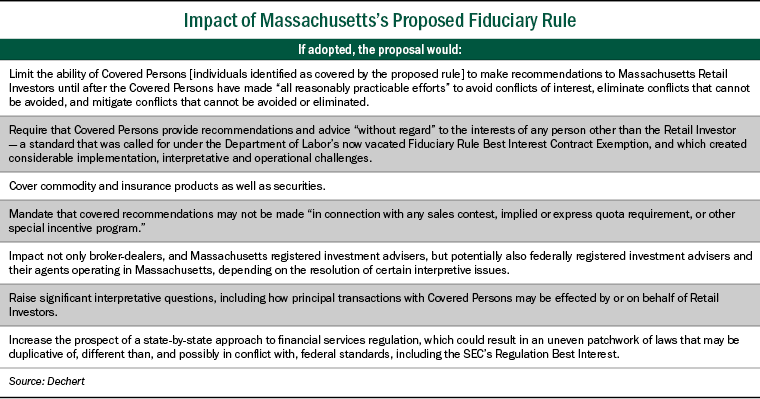 Meanwhile, seven states — New York, California, Connecticut, Delaware, Maine, New Mexico and Oregon — and the District of Columbia have filed a complaint for declaratory and injunctive relief against the SEC and Chairman Jay Clayton in New York because of Reg BI. The suit argues that the SEC overstepped its authority by deviating from what was prescribed by the Dodd-Frank Wall Street Reform and Consumer Protection Act of 2010, among other things.

XY Planning Network — the financial planning platform for fee-for-service financial advisors co-founded by Michael Kitces and Alan Moore — is also suing to challenge the SEC’s authority to issue Reg BI, asking the court to vacate it.