Trump Will Easily Win 2020 if Economy Holds Up, Economists Say

Despite impeachment inquiries being well underway, President Donald Trump is expected to win reelection next year, according to at least three forecasting outfits.

Moody’s Analytics predicts Trump will pick up even more electoral college votes than he did against Hillary Clinton in 2016, the Washington Post writes. Trump’s chances are particularly promising if the economy is the same as it is today and Democrats don’t ramp up voter turnout, Mark Zandi, chief economist at Moody’s Analytics, tells CNBC, according to the Post.

Trend Macrolytics — whose model has accurately predicted every winner in presidential races since 1952, forecasts Trump winning reelection with 354 electoral votes, the paper writes.

“To get something that high, you have to go back to Ronald Reagan, and that may not be possible in the red-blue world we live in now,” Donald Luskin, the firm’s chief investment officer, tells the Post.

Meanwhile, Oxford Economics forecasts Trump taking 55% of the popular vote, unless the economy suffers a substantial downturn, the paper writes.

“While a wide range of issues have influenced presidential elections over the last few decades, from health care and foreign policy, to taxation and government spending, one factor has been constant: It’s the economy, stupid,” Greg Daco and James Watson, two senior economists with the firm, wrote, according to the Post. 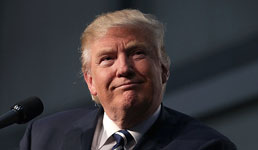 Oxford Economics’ model correctly predicted popular vote outcomes in 16 out of 18 elections over the past seven decades, the paper writes. However, Daco and Watson say their model excludes non-economic factors and attributes such as race, gender or “likeability” — all of which may very well play major roles in next year’s election, they say, according to the Post.