How crucial are financial professional titles and regulating them for the benefit of investor protection?

That’s a question the SEC nearly addressed when it considered — but later abandoned — a plan to bar brokers and associated persons in a broker-dealer firm from referring to themselves as advisors/advisers unless they are specifically also registered as investment advisors with the regulator.

Had the requirement remained in Regulation Best Interest, any reference a broker would have made to the advisor/adviser title would have had to be removed from all materials, including business cards, websites and marketing materials.

When the SEC originally raised this issue, the regulator said the loose use of the "advisor" or "adviser" titles by broker-dealer firms may have led retail clients to believe they were dealing with investment advisors.

Just because the SEC abandoned the plan to limit the use of the advisor/adviser titles doesn’t mean the debate about the merits of clearly distinguishing financial professional titles is dead, according to Derek Tharp.

Portland, Maine-based Tharp authored the “Consumer Perceptions of Financial Advisory Titles and Implications for Title Regulation” paper for the Mercatus Center at George Mason University. He is an assistant professor of finance at the University of Southern Maine.

Tharp points out that a fiduciary rule proposal currently being crafted in Nevada identifies the financial professional titles that would fall under the coverage of the rule.

The policy debate on regulating financial professional titles or the inclusion or exclusion of titles in rules continues in other states, according to Tharp.

Tharp says financial professional titles are crucial in investor protection because they can be a source of confusion for investors. Consumers apparently equate advisors with doctors, while brokers are lumped with car dealers.

In his paper, Tharp presents the results of a survey he conducted to show how U.S. consumers perceive commonly used financial professional titles. The survey — which was conducted online via Amazon’s Mechanical Turk crowd-sourcing website on October 29 and 30, 2018 — was completed by 665 adults in the U.S.

A financial incentive of $1 was provided for each completed survey.

When consumers were asked to group investment-related titles with professions in other domains, they grouped financial advisors with doctors and lawyers, whereas they grouped brokers with insurance salesmen and car dealers.

At Sifma’s annual meeting in Washington, D.C. in October last year, Charles Schwab, the eponymous founder of the firm which bears his name, said “the general public still thinks we’re a bunch of used-car salesmen." He qualified his remark by saying he has nothing against used-car salesmen, but they are known to try and quickly sell the cars on their lots. 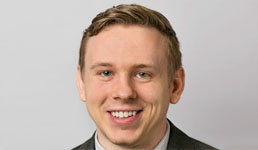 The title of doctor received the highest scores across all nine characteristics among all the professional titles included in the survey. Lawyer received the second-highest ratings in intelligence, work ethic and success, but scored substantially lower in trustworthiness and honesty. Car salesperson and politician were among the lowest-rated in all the characteristics. 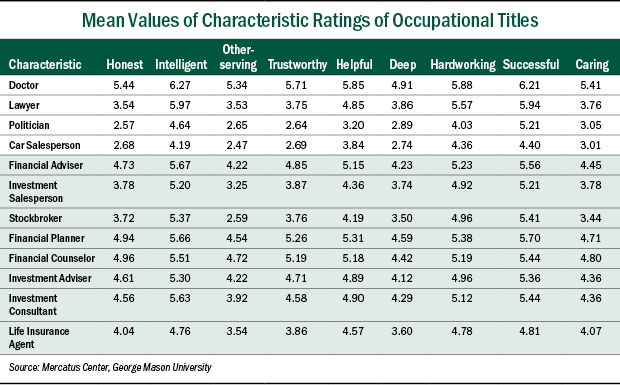 Who gives the best advice?

The ability of someone with a broker title to give advice was poorly regarded, with 0% to 6% of the respondents saying the broker was the best in giving advice in the advice categories.

Tharp says the findings “seemingly support the regulation of titles, but this conclusion should be tempered.”

He tested consumer attitudes toward fabricated titles and found that it was relatively easy to introduce new titles that consumers would group with financial advice-oriented professions.

“That titles matter — and that good titles are easy to fabricate — presents a challenge to agencies that wish to regulate by prohibiting the use of certain titles,” Tharp says.

In the “safe harbor” approach, certain titles would be approved but new terminology would not be specifically prohibited.

“A cat-and-mouse enforcement game may result in which firms adopt new and positively perceived titles that are not on the regulators’ blacklist, to which regulators respond by updating their list, only to have firms introduce new titles. The potential for repeatedly shifting terminology may result in even greater consumer confusion,” he adds.

In the safe harbor approach that Tharp is recommending, certain titles would be approved for use by the SEC, state regulators, or both, but new terminology would not be specifically prohibited.

The approval of each specific title should include a requirement to provide consumers with the responsibilities and obligations of the financial professional with that title, according to Tharp.

“This policy may prove to be more stable than prohibition of specific titles because titles in the safe harbor would become standard in use and meaning,” he says.

“Firms will have little incentive to offer their services under creative titles outside the standard because unusual titles, rather than attracting consumers, would alert them that something is afoot. In turn, titles with standard use and meaning should provide the clarity that is characteristic of well-functioning markets,” he adds.

Are advisors territorial when it comes to their title?

In October last year — when the plan to bar brokers and associated persons in a broker-dealer firm from referring to themselves as advisors/advisers was still a consideration — FA-IQ sister publication Ignites Research surveyed the Top Financial Times 300 RIAs to find out if they agree. These elite RIAs are scored on six criteria: AUM, AUM growth rate, years in existence, advanced industry credentials, online accessibility and compliance records.

Also last year, FA-IQ asked some of the FT Top 300 advisors if there is a need to clearly make the distinction between the broker and advisor/adviser titles and if the SEC’s proposed ban goes far enough, and there was no consensus.

Robert Case, New York-based CEO of Ingalls & Snyder, which is dually registered as a broker-dealer and RIA, said there has been “probably 100 years of history” of brokers being perceived as giving investment advice when they make recommendations.

“I think to take the title advisor away from that activity is somewhat problematic,” Case said. “There are probably other ways to help retail investors understand the differences between what a broker-dealer does and what an investment advisor does.”

“The bigger issue for me is whether they are in fact acting in the best interest of clients and just the issue of acting as a fiduciary,” Weissman said.

Brian Vendig, Westport, Conn.-based president and managing executive of MJP Wealth Advisors, said it’s “reasonable” to clarify a financial professional’s relationship with a client but banning the use of the advisor/adviser title is needed because it “might add complexity.”

Steven Check, Costa Mesa, Calif.-based president of Check Capital Management, said a ban is a “great” and “simple” idea that will provide investors with the clarity they need.