Morgan Stanley’s financial advisors didn’t just make introductions for wealthy clients to the mastermind in the sweeping college admissions bribery scandal: in at least one case, a Morgan Stanley complex manager was one of the clients herself, according to news reports.

William “Rick” Singer, the founder, CEO and master coach of the Key Worldwide Foundation, pleaded guilty in March to racketeering conspiracy, money laundering conspiracy, conspiracy to defraud the U.S., and obstruction of justice, as reported.

Until 2015, Morgan Stanley included Singer on an official list of referrals, and some advisors stayed in touch with him even when he was removed from the list, although the wirehouse's eventual decision wasn’t connected to Singer’s admissions scheme, a person familiar with Singer’s ties to the company tells the paper.

One of the former Morgan Stanley advisors identified in the scheme — in which authorities have so far charged 33 parents — is Michael Wu, who allegedly introduced Singer to a wealthy Chinese family, the LA Times writes. The wirehouse fired Wu in March for allegedly failing to cooperate with its investigation into the scandal but Wu has taken legal action to clear his name.

Wu’s lawyer, Raymond Aghaian, a partner at Kilpatrick Townsend & Stockton, told the South China Morning Post in May that the wirehouse introduced Wu to Singer “as a trusted service provider.”

Meanwhile, Cynthia Newman, a Morgan Stanley complex manager for the group of offices that includes the one in which Wu had worked, had hired Singer herself to help her children with college applications, sources familiar with Newman now tell the LA Times.

Newman has not been accused of any crimes and didn’t respond to the LA Times’ requests for comments. 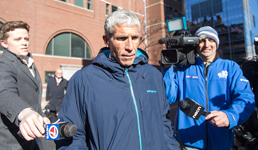 A Morgan Stanley spokeswoman declined to answer the paper’s questions about Wu, Singer and what the company discovered in its investigation of Wu.

Singer’s attorney declined comment to the LA Times, while Wu’s attorney didn’t answer its questions about Wu’s relationship with Singer.