After earning well over a hundred million dollars in his NBA career, former San Antonio Spurs veteran Tony Parker wants to help other athletes hold on to their own money — by joining a financial advice firm, according to news reports.

The 37-year-old four-time NBA champion, who retired from professional basketball last week after a year with the Charlotte Hornets, has joined Minneapolis-based NorthRock Partners, which oversees more than $1.5 billion, Bloomberg writes. Parker, who spent 16 years with the Spurs, will head the firm’s sports, artists and entertainment division, overseeing a team of 20, according to the news service. Parker will live in San Antonio and operate from a new NorthRock Partners office to be built there, according to The Athletic.

Currently, NorthRock’s clients include around 45 professional athletes and several NBA owners who together account for around 20% of its business, Bloomberg writes. The firm wants to expand that part of the business, which includes investment management and tax and estate planning, as well as running athletes’ foundations, according to the news service. NorthRock also wants to begin offering health, wellness and social media assistance, Bloomberg writes.

Parker, born in Belgium and raised in France, was drafted by the Spurs in 2001 and made over $168 million during his career, according to Bloomberg, which cites Sports Reference LLC. The former NBA All-Star was active in business before retiring from basketball, investing in real estate, running his own foundation, and owning a professional men’s and women’s basketball club in France, according to Bloomberg and The Athletic.

Parker began working with NorthRock via a real estate investment last year, and NorthRock CEO Rob Nelson saw Parker's potential as a partner at the firm immediately, according to the news service. After all, Parker was able to avoid the pitfalls that hampered the retirement of fellow basketball player Tim Duncan, Parker’s teammate for 15 years, Bloomberg writes. Last year, Duncan settled with his former financial advisor Charles Banks IV for $7.5 million over allegations that the advisor caused Duncan more than $20 million in losses.

"When I started [in the NBA], and I was 19, I had to find my own tax guy or my own business manager, my own lawyer. So, I didn’t have everything in a one-stop place like we’re going to propose with NorthRock," Parker said in an interview with The Athletic this week. "At NorthRock, it’s just a one-stop place, and you’ll have everything. That way you can just focus on being yourself and perform. And if you want to be more involved, which I’ll always advise, you can educate yourself at least at a minimum." 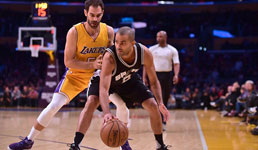 “After a while, seeing people take advantage of athletes, I thought I could use my experience and bring credibility,” Parker said, according to Bloomberg. “I don’t need their money — I have my own. I just want to try to give a solution to the athletes.”