And a Merrill Lynch financial advisor team decamps for JPMorgan.

First Republic Bank is on a tear, expanding its wealth management executive ranks by poaching from rivals, most recently adding an experienced field manager from UBS, according to news reports.

Lovell joined UBS after graduating from college in 2006 and worked up from the firm’s graduate training program to become assistant head of five UBS private wealth offices in southern California, Scottsdale, Ariz., and Denver and then to directly oversee 35 advisors at the Century City branch, the industry news website writes, citing Lovell’s LinkedIn profile.

Over the past several months, First Republic has also nabbed financial advisors from UBS, Merrill Lynch and Wells Fargo.

Separately, JPMorgan has lured a team of financial advisors from Merrill Lynch, a JPMorgan spokeswoman confirms to AdvisorHub. 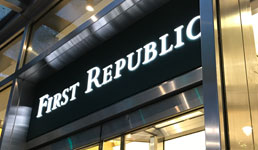 “We are excited to join JPMorgan Securities and be able to offer the personalized service of a boutique organization and the global reach of one of the largest and most respected financial firms in the world,” Heartfield says in a statement cited by AdvisorHub.