The wirehouse is trying to force someone to arbitrate a claim that has nothing to do with their accounts, merely because they were a customer.

Morgan Stanley filed a lawsuit this week laying out an unusually circuitous legal theory against a former customer. Essentially, the wirehouse is trying to force someone to arbitrate a claim merely because that person is a customer – even though the disagreement has nothing to do with the person’s accounts.

The theory, if successful, may permit wirehouses to force customers into arbitration under an even greater number of circumstances than presently allowed under Finra rulings.

A former Finra enforcement lawyer describes the wirehouse’s new lawsuit as “presenting a unique situation.” A top plaintiff lawyer characterizes it as “amazing” — using the adjective with a pejorative connotation.

The Morgan Stanley complaint, filed this week in a federal court in Maryland, seeks to compel former customer Nirav Babu to join a pending Finra arbitration proceeding as a defendant. According to Morgan Stanley’s complaint, Babu received $4 million illegally transferred from the account of some of its other customers, Darrell and Karen Newcomb.

Pal, the Morgan Stanley financial advisor identified by the Newcombs as responsible for the decision to transfer the funds, worked for the wirehouse from 2004 until 2018 -- his entire career. His BrokerCheck records identify that he faced a number of customer complaints — including two which led to settlements of more than $120,000.

In February 2018, prior to the Newcombs filing their Finra complaint, Pal died suddenly at the age of 37, according to a published obituary.

But in its new lawsuit, Morgan Stanley argues that Babu is required by the customer agreements he signed to arbitrate disputes with the wirehouse. According to Morgan Stanley’s new lawsuit, Finra noted in its ruling dismissing its complaint against Babu that it would allow its submission based on a court order requiring such arbitration take place. Morgan Stanley also alleges that if a misappropriation of $4 million took place, Babu — and not the wirehouse — would have been the one engaged in the misappropriation of the Newcombs’ funds. Morgan Stanley also alleges that the Newcombs “fully authorized” the transfer of the funds, so Morgan Stanley had no reason to believe it was illegitimate. (The Newcombs could not be reached for this story.)

“Morgan Stanley is trying to get a second bite at the apple to pull Mr. Babu into a proceeding in which there has already been a definitive ruling that he is not a party,” says Jacob Frenkel, a member of the Washington, D.C.’s firm Dickinson Wright, who represents Babu.

Morgan Stanley’s complaint identifies that one of its employees was “intimately involved with the allegations,” says Frenkel. “On its face, it reads like a supervision and selling away case that Morgan Stanley needs to address” with the Newcombs in arbitration, he adds. If and when Morgan Stanley serves Babu with the complaint — which has not yet happened since the case was only filed this week — his client will move to dismiss the lawsuit, Frenkel says. 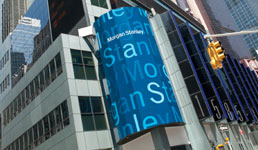 “It’s kind of amazing that Morgan Stanley would go to court and show this in public documents. It blows the lid off an extremely embarrassing episode. To have $4 million transferred to a Wells Fargo account is a black eye to Morgan Stanley,” says Andrew Stoltmann, a Chicago-based plaintiff lawyer and a director and past president of the Public Investors Arbitration Bar Association.

“This presents a unique situation. It presents the issue of whether or not you can force someone to arbitrate a claim that has nothing to do with their accounts but based on the mere fortuity of the person being a customer,” says Bradley Bennett, a former head of Finra enforcement who practices law in Washington, D.C., and usually defends broker-dealers.

A Morgan Stanley spokesperson declined to comment. Timothy Bass, a lawyer from the McLean, Va. office of Greenberg Traurig, who represents the wirehouse, did not return a request for comment.