The SEC’s Regulation Best Interest will most likely be finalized by the first half of 2019, according to Karen Barr, president and CEO of the Investment Adviser Association.

Barr told FA-IQ she’s optimistic about her projected timeline because of her “feel” for the SEC’s rulemaking process and the IAA’s “regular” meetings with the regulator on this issue.

SEC chairman Jay Clayton “has made it very, very clear how fast he wants to get this done,” she told FA-IQ on the sidelines of the Schwab Impact 2018 conference in Washington, D.C. on Monday.

At a media briefing during the conference, Barr said the reported September 2019 date for the release of Regulation Best Interest “is really more of a placeholder.”

The September 2019 final action date for the Regulation Best Interest in the Commission’s fall regulatory agenda reflects Clayton’s intention of finalizing the rule by that time, people with knowledge of the agenda previously told FA-IQ.

Barr is hopeful the final version of the Regulation Best Interest will contain “changes,” though she didn’t reveal specifics. She noted that during the SEC open meeting to vote on pushing forward with the proposal, even the Republican commissioners expressed their concerns and hesitation.

In the same media briefing at the conference, Jeff Brown, head of legislative and regulatory affairs at Charles Schwab, said the firm has been closely monitoring the developments at the SEC when it comes to the “complicated” Regulation Best Interest.

“We’re asking the SEC to make it clear, understandable and to preserve choice,” according to Brown.

Brown said Charles Schwab doesn’t believe the proposed rule is even clear on the standard.

“It’s not clear that brokers should put their clients’ best interest first,” he said.

The most common criticism against the SEC’s proposed Regulation Best Interest is the omission of what is meant by “best interest” in the context of what’s expected of brokers held to this standard.

The proposed rule requires brokers to have a duty to act in the best interest of retail customers when making a recommendation – at the time the recommendation is made. And brokers are required to perform this duty by complying with disclosure, care and conflict of interest obligations.

Four of the five SEC commissioners who voted in the April open meeting – all except Clayton – said the term "best interest" should have been defined because the ambiguity would lead to difficulties in compliance and enforcement, as well as confusion among investors. 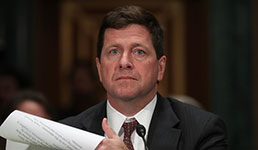 Meanwhile, Charles Schwab’s Brown said there should also be a “harmonized treatment” of issues for both brokers and advisors. For example, both should be barred from conducting any kind of sales contest that would incentivize the financial professionals to disregard the best interest of clients for their own gains.

Both Brown and IAA’s Barr reiterated their criticisms of the Form Customer Relationship Summary, which is meant to make it clear to investors whether they are dealing with an investment advisor or a broker-dealer. Both Charles Schwab and IAA submitted alternative designs for Form CRS to the SEC.

Brown and Barr believe the proposed Form CRS needs to be more visually appealing to investors and simple. Barr added that financial professionals should not be required to explain the distinctions between a broker-dealer and an advisor to a customer. Instead, this should be spelled out on the SEC website and used as reference by the financial professionals, according to Barr.