And the decision could have far-reaching consequences for all cases heard by SEC in-house judges – and beyond.

Raymond Lucia, a financial advisor and the former host of radio show “Buckets of Money”, has won his fight to have his case reheard by the SEC. And the decision in Lucia v SEC, handed down today by the Supreme Court, could have far-reaching consequences for all cases heard by SEC in-house judges – and beyond.

Lucia’s argument for why he should not have been banned by the SEC and fined $300,000 for misleading prospective clients, was that the in-house judge who decided his case had no authority to make such a ruling. Since the SEC’s so-called administrative law judges are hired by the watchdog in a manner similar to regular employees, Lucia argued that their employment was unconstitutional, because like federal judges, ALJs are officers of the United States and therefore constitutionally must be appointed by the president, the courts or heads of government departments. A split court agreed.

Writing for a majority of six of the nine Justices, Supreme Court Associate Justice Elena Kagan said since the hiring of SEC ALJs was unconstitutional, Lucia was entitled to a new hearing either by a new ALJ or the commission.

"Today, the Supreme Court agreed that SEC administrative law judges must be appointed pursuant to the Appointments Clause, and that the constitutional violation in this case requires a new hearing before a new adjudicator," says Mark Perry, partner at law firm Gibson, Dunn and Crutcher, and the trial attorney who argued the case on behalf of Lucia. "We are thrilled with the result, which is a victory for the rule of law, constitutional accountability, and liberty."

During oral arguments several Justices raised concerns that a potential decision in favor of Lucia could have far-reaching consequences – not only for any SEC cases decided by in-house justices, but for all government agencies. From Social Security to the Department of Labor and beyond, ALJs are widely employed in a similar manner to those at the SEC. 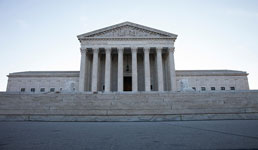 In argument Perry contended that only about 100 cases at the SEC could be impacted by the decision. However, the court countered that in fact thousands of cases across many government agencies could be impacted as a result.

“The broad legal standards articulated today will apply to the federal government in its entirety,” says Scott Witlin, an attorney at law firm Barnes & Thornburg. “The application of that standard will depend on the level within each department at which the ALJs appointments were determined.”