Cornerstone Financial Partners is the latest to pull out of the Protocol for Broker Recruiting, effective December 1. That brings the number of firms that have withdrawn as signatories to 18 this year, according to published records.

Cornerstone Financial Partners didn’t respond – as of this writing – to FA-IQ’s request for additional comments regarding its exit from the broker protocol.

The firm, which does business as Cornerstone Wealth, was named to the Financial Times list of Top 300 registered advisors in 2017 and 2016. To qualify for the list, advisors had to have at least $300 million under management. Qualified advisors were then scored on six attributes: AUM, AUM growth, the company’s years in existence, SEC compliance record, industry certifications of key employees and online accessibility.

The pace of withdrawals from the broker protocol has accelerated, records collected by law firm Carlile, Patchen & Murphy seem to indicate. The 18 firms that have withdrawn from the broker protocol this year, based on the law firm’s monitoring of the signatories, make up close to 20% of the slightly more than 100 firms that have exited the pact since it was created on August 19, 2004.

There are currently 1,696 active signatories to the broker protocol. The broker protocol was created to help cut down the number of lawsuits and arbitration cases filed by broker-dealers because of advisors moving from one firm to another.

The broker protocol lets registered representatives who move from one firm to another – as long as both firms are signatories to the broker protocol – take the following account information: client name, address, phone number, email address, and account title of the clients they serviced while at the firm – and nothing more.

The broker protocol also lets registered representatives who comply with the agreement solicit customers they serviced while at their former firms – but only after they have joined their new firms.

Taking customer information typically means broker-dealers are eventually able to take millions or even billions of dollars in client assets with them.

This year’s exits include the high-profile withdrawals of founding broker protocol signatory UBS, also effective December 1, and Morgan Stanley, effective November 3. When Morgan Stanley announced its exit from the broker protocol, industry experts viewed it as a stern warning to broker-dealers planning to leave the wirehouse and to the firms planning to hire or absorb these individuals. The clear message, say lawyers, is that doing so would lead to more payback in courts or in arbitration. Other firms were widely expected by industry experts to follow suit. 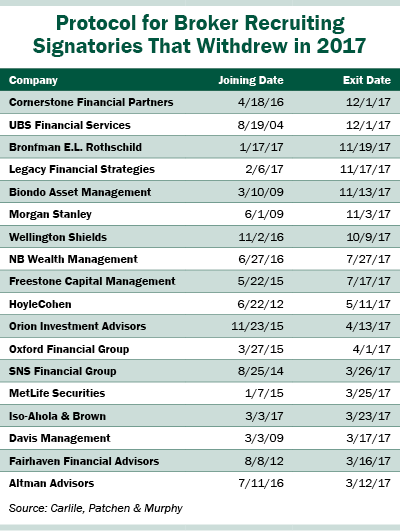 MetLife Securities, which joined the broker protocol on January 7, 2015, left on March 25, 2017 because the firm was dissolved after being sold to Massachusetts Mutual Life Insurance Company.