Agency announces plans to seek public comment on the rule.

The Department of Labor has started the process that could eventually revamp its fiduciary rule, which requires retirement account advisors to put clients’ interest first and goes into partial effect Friday, Reuters reports.

The DOL posted a notice on the White House’s Office of Management and Budget website that it plans to seek comment on the rule, according to Reuters. The move marks the very beginning of a formal review and rule-making process, but it doesn’t automatically lead to a revamp of the original rule, the newswire writes. The DOL needs the information obtained from a public comment period “in order to decide how to proceed," the newly appointed Labor secretary Alexander Acosta said Wednesday at a congressional hearing on the agency’s budget, according to Reuters.

When questioned by Republicans on a House Appropriations subcommittee at the hearing about why he’s going forward with the rule cooked up by the administration of president Barack Obama, Acosta said the agency must still follow the democratic process, which starts with a review, the Hill writes.

“And no one in government should be able to snap their fingers and undo laws or undo rules because that’s not a respect for a fundamental democracy,” he said, according to the publication.

Nonetheless, Acosta also said the Obama administration decided to go through with the rule without addressing certain issues raised by its critics, such as the claim that the rule would exclude some Americans from being able to afford financial advice, InvestmentNews writes. 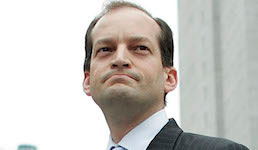 Earlier this year, the DOL had postponed the April implementation date by 60 days following a memorandum from president Donald Trump requesting another review.

Last month, Acosta said the rule would go into effect without further delays but made it clear the “controversial regulation” needed further review ahead of the full implementation date scheduled for the start of 2018.

Meanwhile, the rule still faces repeal as part of the Dodd-Frank overhaul bill the full House of Representatives is expected to vote on as soon as Thursday. One of the provisions of the Financial Creating Hope and Opportunity for Investors, Consumers and Entrepreneurs (CHOICE) Act is requiring the SEC to move first with its own fiduciary rule before the DOL can roll out its version. But even if passed by the House, the Financial CHOICE Act would likely face more opposition in the Senate, where Republicans hold a narrower majority and would need the help of more Democrats.