Most strides have been made in consumer banking but investors are increasingly served by AI.

Financial advice firms need to embrace artificial intelligence to replace mundane tasks carried out by humans so they can remain competitive, according to a new report from natural language recognition software provider Narrative Science.

Thirty-two percent of companies across the financial services industry are already using AI for predictive analytics, voice recognition and response and recommendations, according to a survey of more than 100 executives in the industry conducted by the National Business Research Institute and Narrative Science this spring.

While banking is expected to lead the adoption of AI, according to the report, wealth management firms stand to benefit from incorporating the technology or risk falling behind their peers. For starters, AI can help advice firms personalize communications with clients as the financial services industry increasingly steers toward a customized customer experience, according to Narrative Science.

AI is also coming to the fore when it comes to controlling spending. Apps such as Moven and Simple already deliver personalized automated recommendations based on machine-learned spending and earning habits of their users, according to the report, although it could be a matter of time before such programs reach the financial advice market.

“For me, advice is the next big disruption,” Brett King, CEO of Moven, says in the report. King thinks banking is the industry poised for the most disruption, but he may have a takeaway on how traditional advisors stand to fare from AI competitors: “The ability of humans to provide [advice] is poor and, as humans, we’re inconsistent and we make mistakes. Artificial Intelligence will not,” he says in the report. 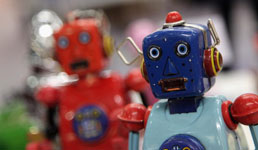 The report also addresses the rise of robo-advisors. Through AI, they can already build algorithm-based portfolios made up of low-cost ETFs based on information collected from clients, according to the report. Robo-advisors do so without any assistance from human advisors, and can then automatically rebalance portfolios to stick to established goals while costing less than 100 basis points, compared to advisors who charge up to 3% of managed assets as well as commissions on trades, Narrative Science writes.

Robos are no longer the domain of startups such as Betterment and Wealthfront, as established fund firms including Fidelity, Schwab and Vanguard have incorporated robo-advice into their offerings, according to the report. And some companies, such as USAA, which offers financial services to military companies, are already using AI to create personalized portfolio performance reports, Narrative Science writes.