Merrill Lynch FAs Must Refer Clients or Get Pay Cut

Brokers who don’t make at least two referrals to Bank of America will lose 1% in pay.

Merrill Lynch brokers will now have to refer at least two clients to other units of parent company Bank of America next year if they want to keep the same pay, people familiar with the matter tell the Wall Street Journal.

Advisors who don’t make the quota will lose 1% of their pay, those sources tell the Journal. The referrals can be made to Bank of America’s retail bank, the online brokerage platform Merrill Edge, or other parts of the bank. In addition, brokers will receive credit even if the referrals don’t end up in new business, according to the Journal. That decision may have been driven by the scandal at Wells Fargo, which paid $185 million in fines over aggressive cross-selling at its bank unit that led to the opening of up to two million fake credit and deposit accounts, the Journal contends.

Meanwhile, Merrill advisors “welcomed” the change, sources tell the Journal. In part, that’s because the broker pay grid will remain the same in 2017, according to a Tuesday announcement by the company’s executives cited by the paper. In the past, Merrill has been more aggressive with pushing brokers to boost production.

The company raised payout thresholds for 2016 that led to some brokers losing up to 2% to 8% of their pay if they didn’t increase what they brought in through fees and commissions, the Journal writes.

Prior to this change, Merrill slashed broker pay on accounts smaller than $250,000, according to the paper. 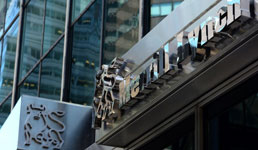 Merrill Lynch isn’t the only wirehouse making it harder for brokers to keep the same pay. In June, UBS reduced the number of bonuses available to brokers in 2017, although it also raised payouts for teams generating $1 million or more, the Journal writes. But Merrill rival Morgan Stanley is raising almost all of its payout thresholds by 10% starting next year, sources told AdvisorHub and the Wall Street Journal earlier this week.